We headed towards Solomons Island for a late lunch. Because we have gift certificates for Kingfishers, that’s where we decided to eat. On our way, I noticed what looked like a navy vessel anchored near the base. I then noticed a second, and a third! Due to the very gray day with gray light, the gray colored vessels were actually rather difficult to see. I wondered if they had been sent up the Bay in order to provide space for other vessels at Norfolk; taking refuge from wherever Matthew finally makes land fall, with the added concern that he might bounce up the coast and possibly hit Norfolk.

Although we cruised in the direction of the base, we didn’t get too close to the ships since I didn’t want to meet our military’s finest up close and personal. Instead, we tried to make it look as though we happen to be passing by on our way to the Bay. Upon closer inspection I discovered the vessels belonged to the US Army, not the Navy. Cool. 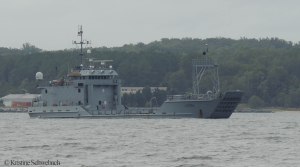 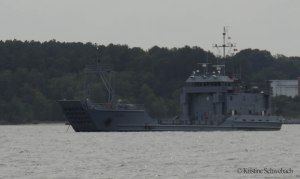 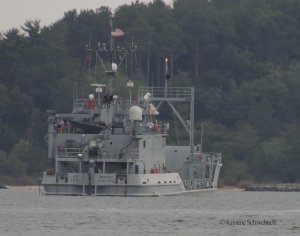 We looped around and headed to Solomons, via the direct route from Drum Point to the island, and onward towards Kingfishers. Prior to going to Kingfishers we cruised up past Calvert Marina to again check out the trawlers staked at the floating docks. We noticed an event tent had been set up on land which announced the gathering of Krogen Cruisers. 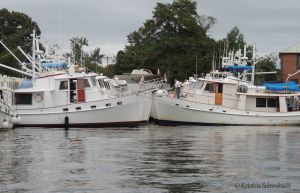 At Kingfishers, we docked at the far slip where the fish cleaning station sits. It’s more like a half-slip which requires using a stern and mid-ship line. Once on dock, we passed a table of two ladies and a man sitting outside on the patio. All three complimented us on our boat saying how nice, and unique, she looked. We thanked them and also sat on the patio at a table in the sun. After Kingfishers, we went to Island Hideaway as Lori wanted their homemade fries.

As we approached Island Hideaway I noticed M/V Crabby Lady had two people on board cleaning her… most likely the owners. Prior to disembarking, we noticed the dock COVERED in bird poo. Lori didn’t want us to get it on our shoes, and later out boat, so she pulled out the raw-water hose and washed off enough of the pier to allow for a clear path. As we passed Crabby Lady, the owners complimented us on our docking. I said, “Thank you. It’s always nice when it looks like you know what you’re doing.” They smiled and nodded. All boaters know there are those times when you come into a dock and nothing goes right so you look like a bit of a moron.

At Island Hideaway we again sat outside, although it seemed a bit chillier as shade covered most of the patio area. It was tolerable and we remained outside. We noticed a couple of groups of young high school kids on the dock, all dressed up and having their photo taken. We guessed they were out on dates for Homecoming. It amazed me how goofy some of them either looked or acted. We quietly mocked them as they went about their antics.

While sitting there eating, I noticed a very large vessel tied up at Harbour Sound. Of course I wanted to take a closer look. When we left we cruised by and noticed that it was M/V Seafarer out of Jupiter, FL. Nice. On our way out of the channel, we saw R/V Rachel Carson coming in from the direction of red marker ‘6A’. Too bad we hadn’t left just a little earlier to see her more fully underway. Such a beautiful site either way. 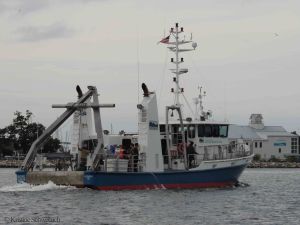 On our way home we stopped at Dee and Greg’s house. They are expecting their family for the weekend. One daughter had already arrived with her husband and two kids. As we walked up the steps, one of the boys asked, “Why are you here?” I answered, “Because I’m a pirate!” That seemed to be a good enough answer for him. We sat and chatted with the family for a while. One of the boys asked where we lived. I pointed towards our pier and said, “Right over there. When we leave you’ll be able to see where we go. You’ll see our boat on the lift and that’s where we live.” I wondered if that made him want us to leave sooner. We did finally make our way home after a lovely visit. 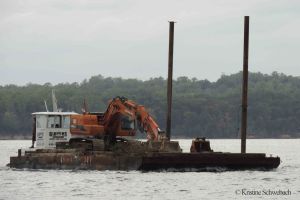