Barry thought it was too windy to go out on their boat, so they came over to our house to go out on our boat. Not knowing true conditions, we agreed that if we got out there and it was, indeed, too rough, we’d turn around. Preparing to leave I gave Barry the front pad for Lori to attach. Barry said he could do it, pointing out, “See, I did it.” “I doubt it,” I responded. He looked at me funny then went back up front to look at the cushion, realized he had not attached it correctly and quickly rectified the matter.

The river didn’t seem rough at all. I wondered why Barry thought it was “too rough.” We headed to Solomons Island. On the way, Barry and Lori sat in the bow. As we rounded the tip of Solomons Island, Barry attracted my attention to a boat at my 2 o’clock position coming at us. I immediately slowed down. Thank goodness for diligent look outs – I had not seen the boat until he pointed it out. Rather scary to have been on a collision course. Barry said the other boat was doing nothing to avoid hitting us. That provided little comfort since a collision is a collision.
Once we reached the channel leading into the back creeks of Solomons, I slowed and said, “Ok, I got us to Solomons. Where are we going to eat?” Nobody had any opinions so I suggested Kingfishers since we hadn’t been there in a very long time. I’m not sure we’ll be returning often in the near future. Now with Eric no longer around full time as manager, the menu is less than stellar. In fact, I was quite disappointed.

After our meal, we walked down to Striped Rock in order to see Matt. We had a drink or two – unsweet tea for me, thank you very much. We had a great time at the back bar. Katie and Jeff were there. I don’t know where they had come from, but Katie was well…. Feeling very happy.

We returned to Kingfishers, hopped on the boat and decided to stop at Island Hideaway. We decided to sit inside, out of the heat. I rather enjoyed sitting at the bar as it gave us a chance to talk with the bartender. While there we saw Shorty and Kelly. We said our ‘hello’s and I made sure to tell Shorty he needed to stop talking so much.

As we headed out of Solomons, Eric suggested going to Broomes Island, “For just one.” We all agreed. Upon arrival, with our favorite inside wall spot occupied, I indicated our second choice – the slip on the far pier. Lori said, “No, just park along the sea wall;” which I did.

Hanging out at the outside bar, talking with a plethora of friends as Shrimp Boy bartended, we noticed a couple of young’uns skipping rocks. I commented, “Boy, Jeannie hates it when she seeds kids (people) throwing rocks into the water.” She, however, had traveled out of town for the weekend. I didn’t think it was my place to stop them, since they seemed to be doing ok. 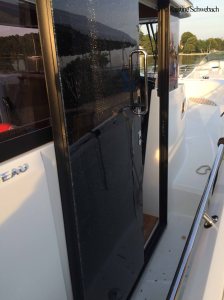 The sun had begun its downward trajectory into evening so I decided to switch out our sunglasses for our regular glasses. I boarded the boat and saw something near the captain’s door, on the starboard deck. It looked at first like confetti. I picked up a piece to discover it was a piece of glass. I then realized the confetti was shattered class. I remembered a few years ago, the Boyz’s Baja sat in this same spot and had been so badly rocked a side glass plane had hit a seawall piling and shattered. Looked at the piling, our gunwale, and quickly assessed there is no way that had happened today. Also, we had never noticed any boat wake, or rough water, throughout the afternoon. I looked back inside and that’s when I saw a rock sitting amongst the glass shards.

I tried to yell up to the bar to get Lori’s attention. I then called Barry, asking him to please go tell Lori to come to the boat ASAP, like NOW. I see him deliver the message and Lori make her way towards the boat. As she approaches the boat, all snarky with attitude, I immediately pointed out the shattered door, picked up the rock, and said, “And I found this sitting here.” She said, “Oh, hells no!” She whipped around and went looking for the kid we had seen earlier throwing rocks. As she walked away, she instructed me to call DNR.

Friends, T and S, had been sitting at a table with their son and his friends near to the “rock throwing area”. They had heard a rock hit something and thought their friend’s boat, not knowing our boat had been hit. When they heard the ping, they told the kid to stop throwing rocks. When Lori passed their table, they knew exactly where the kid sat, and Lori found them.

As she took care of talking with the perpetrator, I called DNR. I called a DNR phone number I happen to have in my contacts. To my surprise, a human answered. I didn’t actually expect that for a Sunday evening. I explained what happened and where; requesting an officer. The woman on the phone recommended I call the police, county police, for a faster response time. I went up to the bar to ask Shrimp Boy if he knew a non-emergency phone number for the sheriff’s office. He rattled off a number without a second thought – of course he would know that number. When I called, however, I got a recording with a long series of “press a number for” menu.

That was taking too much time without contacting a human, so I hung up in order to call 911. When they answered I immediately explained this is not an emergency and if they need to transfer me that it would be ok. The operator said it was fine and asked what I needed. I proceeded to explain everything, including DNR recommending I call the county policy for a faster response. They said they’d send someone.

While waiting I saw Eric and Barry leaving with Mike and Irene on their boat. They yelled over to me that they would be right back.

We continued to wait for the police. Wait and wait. As we waited the culprit and his adult companions came down to the boat. I young teenager and his grandparents. The grandmother offered to write a check but Lori indicated that the cost would be, most likely, significant – our deductible alone is nearly US$ 2000. This stunned the grandmother.

As we waited, I worried it would be late evening before they ever showed up. A few friends came to the boat to check things out. Mary pointed out that Mark and Kim had just pulled up in their golf cart and sat in the lower parking lot trying to be inconspicuous. She said that because of they have family who are police officers they have a police scanner. They obviously heard the call for Broomes Island and immediately came down to spy out the situation. I can’t fault them for that – I would probably do the same thing.

Finally, I did see a police officer arrive. As I approached him I saw his name, Officer Robinson. I asked him, “Officer Robinson, are you the same officer who showed up at Prince Frederick DNR when the ceiling fell a few weeks ago?” It was! He then recognized us as being involved in that incident.

We walked down to the boat, explaining the situation and stating that we called the police in order to have a case number for insurance purposes, which he immediately produced. We were soon joined by two more officers, who confirmed that no further action was needed on their part as it was an accident rather than a malicious act. I felt a bit bad for the kid, he was crying because of the whole situation. Poor thing. He was in town visiting his grandparents while his parents were on vacation.

I sent a text to Matt showing him how cops had arrived at Broomes and we were the cause. He later said they were all at Striped Rock speculating about what Lori and I had done this time.

When the police left, thinking about our journey home, I asked Shrimp Boy if they had duct tape. They did so I could tape up the hole and “secure” the door in the hopes of getting home. Yep, we were the boat with duct tape – a bit of karma I suppose since a few days earlier I mocked that boat which had duct tape around its windows. About this time I see the Boyz returning on their boat. They had gone home to bring us duct tape, not knowing we could get some from Stoney’s.

We considered leaving when we noticed Colin and Julie arriving on their boat. Since we still had some daylight, we decided to stay to chat with them for a while. As the sun began to set we decided we needed to head for home so we could get home before dark… not knowing how the door situation would hold up. Fortunately, we made it home without further incident.