We offered to take P and C out to eat in celebration of P’s 60th birthday – which was last Sunday. As the birthday boy, we asked him to choose the restaurant. He originally picked the old Tides restaurant, now I think called Elements. Fortunately, this morning Lori did some research, made a phone call, and discovered the place was closed on Sundays. Since the restaurant caters a great deal towards the week day base employees, it made since they would choose Sunday as their ‘off’ day.

We informed P of this new development and suggested going to Ruddy Duck at St. George’s Island. He countered with wanting to go to Kingfishers. Fine with us, but I told Lori if we went to Kingfishers I wanted to go by boat. P was fine with us picking them up at his pier, but said he didn’t want to get wet. Lori reminded him – with our boat it really doesn’t matter whether or not it’s raining, you’ll stay mostly dry.

We picked P and C up at his pier at 12:45. I had intended to come to the end of their pier, but the wind whipped me around causing mild havoc. We instead simply drove into the side slip, they jumped aboard, and I backed out to get on our way. Although they have seen our boat, they have never gone for a ride on our boat. They were amazed at how cozy and warm it felt inside the pilot house. 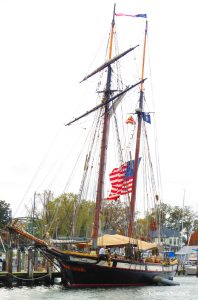 As we approached Solomons Island, we encountered a lot of sailboats – almost regatta like clustering. Now, at this point let me state – P has not had a boat now for … what? … two years? Also, I am a licensed captain! To top it off, I am driving my own boat. Having said this, I found it interesting that P felt compelled to tell me how to captain and where to drive. Um … what!?

As we neared Solomons I noticed the wood masts of what looked like a large sailing vessel. Entering the channel we saw a nice wood sailing vessel tied up at Waterman’s Wharf. It looked smaller than I expected. Still impressive, however. Most interesting to me – I had never seen this vessel, Lynx, before. Yes, I understand there are so many vessels out there that I haven’t seen, but I thought I’ve seen the tall ships that regularly ply the Chesapeake waters. Lori took the helm as we passed by so I could snap a few photos.

We had a lovely meal at Kingfishers. I was so happy to see they had again changed up their menu which meant I had something new to try – a zucchini pasta dish.

After our meal, we sat around chit-chatting and see Walt walk up to say ‘Hi.” We gave him big hugs and asked if he’d be interested in joining us. A bit to my surprise, he accepted, sat down, and had a drink with us. We shared Halloween stories – he had gone to a neighborhood party dressed as Bruce / Caitlyn Jenner. Funny.

As we left the Solomons area I noticed the tall ship no longer sat docked at Waterman’s Wharf. Oh well, at least I got to see it. Luckily, however, we saw it out on the river returning from a little touristy cruise. I wish we could have seen it under full sail. As we motored along I stepped to the side, hand still on the wheel, and held up my camera – not to my eye – to snap a picture. P jumped in to try to take over the helm. He backed off when I stepped back squarely in front of the helm. This again happened a second time with him almost knocking me completely out of the pilot house. I asked him, “What the f – do you think you’re doing?” He answered, “I was going to drive so you could take photos.” “Did I ask you to take over the helm?” “No.” “Well, then back off!!” If you can’t tell, I’m not amused by actions of mutiny on my ship.

We returned P and C to the Beach. On our way back up river Lori got a phone call from the Boyz. I heard Lori say, “We’re now passing Point Patience.” Pause. “Oh, good, we’re heading there, too.” I wondered where we might be heading to next. I found out that the Boyz had just finished lunch and were heading to our house. Fun. To my surprise, we made it to our house before them.