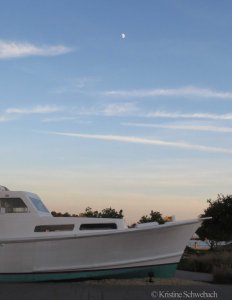 Tonight we had cornhole at Broomes Island. As we are nearing the end of fall league, everyone is even more attentive to wins and losses of the top teams. As it is, several teams have an equal number of wins and losses meaning it’s a toss-up for final placement. So basically tonight is a “any given Sunday” situation.

The cornho’s won their first two games, but lost their third. DRAT! I know I said this before, and I know I will say this again … I am sooooooo glad Lori ditched me as a cornhole partner in order to play with Doris … AND I am so glad to have the freedom of not having to play!

We had a lovely ride home. Even though we barely had a half moon, it was still quite bright. Today’s Southern Maryland news announced a small craft advisory for tonight. Obviously that warning didn’t deter us from going by boat. On the way home, however, we had NO wind and FLAT water. Absolutely gorgeous ride home.