Lori has been wanting to coordinate a raft up for a long time – and today it finally happened. I had originally proposed the Battle Creek area, hoping for fewer nettles further up river. I even offered to pick-up boatless Broomes friends. During cornhole, however, we learned that the BI ladies planned an island golf cart day as for Missy’s last weekend before returning to work in Minnesota. Because of this, Missy asked us to host the raft up in Island Creek saying she could swim out if she had an opportunity. We agreed with our estimated time for anchor down at 1:00 pm.

We packed a couple of coolers for food and drinks, as well as the grill and a few propane tanks. As we headed up river we noticed Miss Ellen cruising down river. Wait! What? Were they not going to the raft up? We both slowed. Ted yelled over that they just wanted to test run Miss Ellen, blow out the carbon one might say. They would meet us in the creek. 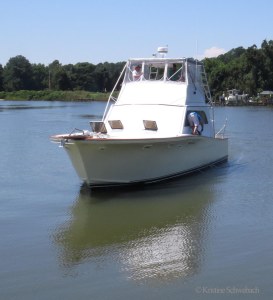 We continued on up to Island Creek. We followed a Sea Ray sedan bridge into Island Creek. They dropped anchor VERY NEAR to where we needed to drop anchor…. To ensure Missy could swim to us from Southern Acres. As we approached Southern Acres area I noticed someone on their pier. We cruised over to see Joanie at Island Time Tiki Hut. She had thought she’d be on Miss Ellen, not knowing they planned on leaving early for a ride. She accepted our offer to join us and climbed aboard.
Just as we set our anchor we saw Miss Ellen entering Island Creek. We pulled up our anchor, let Miss Ellen set her anchor, then rafted up with her on our starboard. Ted, Scott, Ernie and Marlene were included in the Miss Ellen crew. In short time we had a large group of people joining our raft up including: Reel Joy, the African Kween, friends of African Kween, Kevin in kayak; Amber, Charles, Dave, and Taylor on jet skis… and finally, Who Ray IV.

Prior to their arrival, all of the raft up boats were outboard, center console type boats, except Miss Ellen with no ladder nor swim platform. Tony showed up for a brief hello, as well as Judy and Dan who had kayaked over from their home in Nan’s Cove. When Who Ray IV
arrived we decided to blow up and throw out our nettle net off their swim platform. I’m glad we did because a lot of people happily floated in the water to cool off. When Jeff and Kari arrived she thanked us for arranging this, saying, “Leave it to you two to bring us all together.”

We had lovely raft up weather – sunny and hot … almost too hot. Lori cooked up hot dogs on our grill while Miss Ellen provided the buffet area. Late in the afternoon, the golf carting ladies arrived at the shoreline of Southern Acres. We decided to move the raft up gathering to Tommy and Julie’s pool. We packed everything away, gained a few extra passengers, and headed towards the Tiki Hut. Being the last boat to arrive, we docked on the end cap.

Once on shore I don’t think anyone actually got into the pool. Instead, most of us sought the sheltering relief of shade. About an hour later people decided to head to Stoney’s … most by golf cart … to meet up with the BI Ladies partying. Lori and I choose to go home instead. The Boyz begged us to stop at Stoney’s, for just one, but we needed to rest and prepare for the up-coming week. On the way home we stopped at Blackstone Marina to pump-out the head.