Lori captained nearly the entire ride, both there and back. She planned on docking at Broomes Island, also, but our favorite wall spot was already occupied. Because of that, I took over docking responsibilities into our alternate slip choice. We are so dialed in when it comes to docking in this slip that I whipped it between the poles like a pro, and neither one of us had to say a word to each other in order to get the job done. I always like it when it looks like we know what we’re doing.

Lori prepared for an evening of playing cornhole while I went up to the bar to fetch both her and Sophie drinks. As I headed towards the cornhole tent to deliver drinks I heard my name being called out. I turned around to see Julie sitting at the bar with a drink. What a lovely surprise! She was there, at the bar, waiting for a client. My kind of job. I 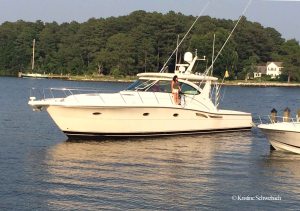 rushed the drinks down to Lori and Sophie then returned to the bar to talk with Julie.

While chatting we saw “Market Price” arrive with Jeannie and Phil on board. Excellent! Another unexpected surprise. They docked along the wall near to the boat bar. Since the boat bar is usually

closed during the week, including today, I thought they would come up to the upper bar. Nooo, they did not come up. Instead, they set up a table down below near to their boat and the boat bar.

Julie and I gathered ourselves and headed down to join them. John, Phil’s – and Walt’s – brother also sat with them.

SCORE – with cornhole in progress that meant Walt was also at Stoney’s. I made sure to force the three brothers to come together for yet another photo. Phil was being quite … tart … with me, trying to harass me. Later I mentioned this to Jeannie – she assured me that his “harassing” and talking with me shows that he does like me. Whew – I didn’t want to have him upset with me.

I enjoyed spending the evening with them all. As dusk approached they prepared to go home and I went to the upper bar where cornholers gathered as they finished their games. As soon as Lori said, “You want to stay ‘cuz it’s your last day here for a while”… I got my party on.

We finally did depart towards the end of dusk and the night time light began to overtake the sky. Lori captained the entire journey home. We had a lovely ride as a lovely, not quite full, moon light the sky.