We had made plans with the neighbors to go out for a late breakfast. We agreed to try the new small café at Calvert Marina. It is definitely a SMALL, almost tiny, café. We had RC and V as well as their kids, along with G’s best friend.

We had a lovely breakfast. I looked over their non-breakfast menu and found a few different items that I would like to actually try. So unusual for a restaurant on the water to have non-seafood choices of interest. It would be nice if this little restaurant could actually survive in its location.

When we finished, we then went to Solomons Yachting Center in order to fill up on gas. Because we had kids I asked everyone to get off the boat while fueling, which is, technically, what should be done every time. Usually, it’s only me and Lori on the boat so I don’t count that as needing to clear out the boat.

Once we finished and had everyone back on board, we headed back towards home. As we passed Clarkes Landing we saw Stefanie and Rick anchored out near marker ‘4’ with one other boat. We let them know we would be back to join them. As we passed Blackstone Marina we saw Sam and Kathy leaving in the African Kween. We figured they might be a bit confused since they planned on coming out to meet us. I actually thought they might follow us to our house … but they didn’t.

We dropped off the family, packed a cooler of snacks, and headed back out again.

Between the time of passing Stefanie and Rick earlier and our return, their raft-up had expanded into quite the party, which included the African Kween. The raft up consisted of the African Kween which sat closest to marker ‘4’ and the race, Stefanie and Rick, an older couple in a center console, Karen B and Dana on their center console ‘Reel Estate’, a deck boat, and finally us. As we

approached I noticed Rick and one other boat had anchors set, but due to the size of our boat compared to all the others I dropped our anchor as I backed into the end slot furthest from marker ‘4’.

Once set I scrambled across all the boats to get to the other side and onto African Kween as it sat closest to the race. I expected a lot more boats to participate, but it seemed like only 4 boats total raced. As we watched the races we noticed storm and rain clouds passing by, but it stayed near to Leonardtown and we had a lovely day. 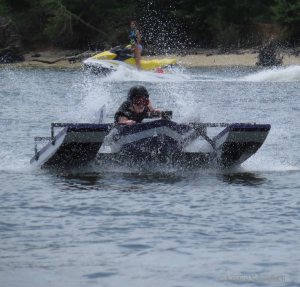 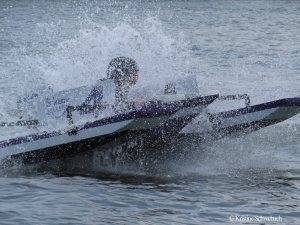 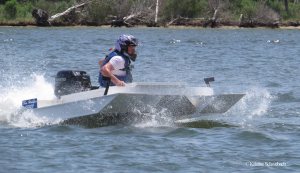 The race ended after only a few short hours. Unfortunately, RC and V, with kids, arrived just as the races ended. They rafted up to our starboard. To our surprise, Greg and Dee arrived on their jet ski. Once the races ended Walt came over on his jet ski to say ‘hi’. He tied off of RC&V’s stern and came aboard our vessel. He stayed only a short time as he wanted to get up to Broomes Island in order to watch the Belmont race which we watched later at Sam and Kathy’s. Fortunately, I remembered the race and we turned it on just as they were leading the horses to the gates. An exciting race as it resulted in American Pharoah winning the first Triple Crown winner since 1978. 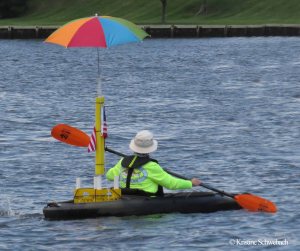 Although most of the rafted up boats headed over to Clarkes after the races, we hung out for another hour or so while the kids floated on a blow-up raft boat. When we prepared to go home, the neighbor kids asked to ride with us while G’s friend wanted to be pulled home on the pull raft.