Prior to departure we talked Barry into coming down to our house for pre-drinks… which for Lori and Barry consisted of champagne. Eric is currently in Delaware with his siblings to take care of his mother. When Lori and Barry finished their bottle we decided it was time to head up river to Broomes.

There were A LOT of people at Broomes, most of them hanging out at the boat bar and under the tent where the band, Transfuzion, played. Phil was there on his Tiara, “Market Price.” I actually spent quite a bit of time talking with him throughout the afternoon. He again thanked me for the picture puzzle of him and his two brothers, Walt and John. He even admitted he “teared up a little” when he saw it. Wait! What!? This can’t be Phil talking. He also said it’s one of the few pictures of him with his two brothers. Amazing. I’ll have to print a copy of the photo to give to all three brothers.

A LOT of our friends were there, mostly on boats, including: Stefanie and Rick as well as Bay, Joe and Tammy on their twin cat, Katy, Jeff, and Katy’s mom, the Boyz’ neighbor Karen, and of course, Barry. Karen said she had a very scary docking experience when she arrived. As she swung around to dock along the inside wall the wind caught her and pushed her into the rocks along the shoreline. Fortunately, a friend of hers witnessed her distress and came to her rescue by wading out and pushing her back out away from the rocks. 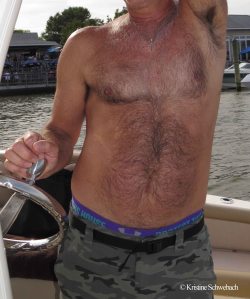 At some point in the afternoon someone brought up the topic of “Tatas for Ted” book I had made for him from his wedding day. More than one person said I need to do something for the women. Julie took it upon herself to orchestrate getting men to bare their chest in order to have their photo taken. She claimed to be fund-raising for charity. Interesting how men willingly exposed themselves. Julie enjoyed herself immensely.

In the afternoon I noticed Katy and Jeff sitting on “Market Price.” Before jumping on board to talk with them I turned to Phil and asked permission to board his boat. He said, “Honey, you can do whatever you want.” WOW. I think he actually likes me. I had never been on his boat, or any Tiara for that matter, so I took the opportunity to take a tour. I now understand why people like the Tiara, it was NICE.