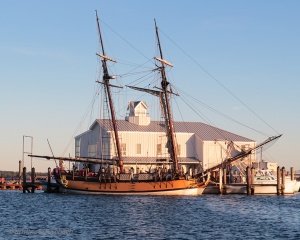 Lori had invited Debbie and Dave down for the afternoon. Since we had no plans we decided to cruise to the Solomons area and cruise around looking at houses along Mill Creek. As we came around Solomons Island towards the channel I noticed the masts of a tall ship. Once we entered the channel I saw that it was the Sultana from Chestertown. What a nice surprise and treat.

It still amazes me at how much water is tucked up in there. It seems like no matter how often we cruise back here we always see something new. While back in the creeks we decided to go to Spring Cove Marina to fill up on fuel. Unfortunately, there were two large vessels already tied up at the fueling docks. From the size of the boats we knew that it would be a long time before they finished. We quickly decided to skip fueling and instead stop by Kingfishers for a snack.

We picked a slip to dock in, a fairly wide slip. Lori easily lassoed the starboard bow piling but could not get to the port side bow piling. I turned on the bow thruster to move her over but the bow thruster had a funny whining whirl sound and did NOT work. SHIT!!! We then tried pushing ourselves off the starboard piling to the port, but the MAJOR wind funneling down Back Creek pushed against our efforts.

I heard Debbie say, “Let’s just go home.” Honestly, I did not appreciate hearing anyone giving up on us and our ability to dock. Instead, we moved over to a narrower slip and easily tied up. Mental note to self – narrow slips. With the significant wind I was impressed we made it into any slip.

We had drinks and appetizers at Kingfishers which Debbie and Dave very much enjoyed. Afterwards we headed for home.
Time: 2:50 pm – 6:05 pm
Engine Hrs: 60.3 – 62.5
Conditions: cool and a LOT of wind
Vessel: Beneteau Barracuda 9