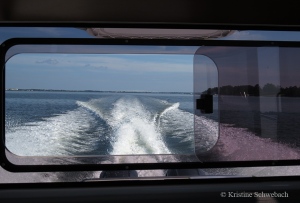 We’ve been having very high tides today, especially tonight as we left our pier. For several days we have had coastal flooding alerts. When we arrived I saw Ron and called him over to the boat. I had brought along a big micro-brew bottle to share. The brew was a collaboration between the two new Prince Frederic breweries – Mulleys and Scorpion. They named the beer – 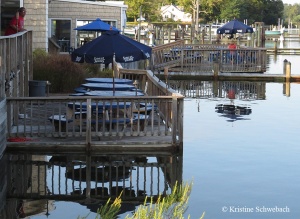 Commodore Barney Brown Ale. Ron couldn’t believe I had a bottle of this, and asked where I found it. According to him this is a collectors’ item. I asked, “So, that means we shouldn’t drink it?” Correct. I then promptly popped it open and began to pour. 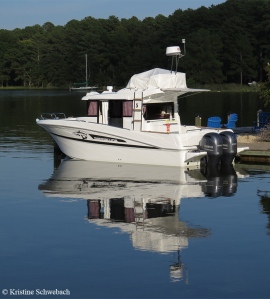 to come on board. He did. While he looked around he turned to me and started to explain, “I’m usually free on most weekends. Now with school I’m only available on some Fridays so you need to talk to my mom and find out when I don’t have school.” Too cute!!! He so very much wants to go out on the boat.

Although tonight is cornhole night, I didn’t spend much time with the cornhole group. Instead, I went over to hang out with the people helping to prepare flowers and other items for Ted and Missy’s wedding tomorrow. When I first walked into the garage K said, “Oh no” in a very disappointed manner, as if she were upset to see me arrive. I thought, “Fine, I came to hang out with Julie anyway.”

We were expecting the boyz to show up, especially since they were bringing the linens to be used for the wedding. I got a call from Eric saying they were on the way over but had a major leak and needed to go home. They told me they would drop the bag of linens at the bulkhead wall for me to pick-up. Julie and I walked over to the drop point. Anthony had seen the boat fling this large bag onto the wall and take off so he drug his dad over to help investigate. Fortunately, Rob then carried the linens for us as I don’t think Julie and I would have been able to do it by ourselves.

Once we secured the linens, Julie and I returned to assist with wedding preparations. Once the flowers were done everyone deserted the area. I stayed so I could talk with Julie. We sat on Sandy’s front porch area when it dawned on me, “Why don’t we go inside with air-conditioning and no bugs? I’m sure Sandy won’t mind.” “You are brilliant.” With that we picked up our supplies and headed indoors, out of the muggy, buggy, heat. By the time cornhole finished most of the preparations had been completed for the evening.

A light rain had started just as we planned on leaving. At first we thought we’d just sit and wait until it had passed. After a short while we decided to go home in the rain since we didn’t see any lightning. I’m glad we did because about a half hour after arriving home heavy rain began to fall.