Time: 9:30 am – 6:30 pm
Conditions: rough in the morning, waves 2-3 feet from the north; pleasant sunny afternoon, smooth ride on the Chesapeake Bay on the way home with waves 1 foot
Vessel: Double D

Although I technically did not captain on this journey, the day still deserves a posting in the Captain’s Chronicle.

A group of us met at Calvert Marina to board Double D for a journey across the Chesapeake Bay to watch the Hooper’s Island Boat Docking Contest. I had originally planned on taking our boat and simply follow Double D. I then realized, we would have more fun if we were on Double D so we could be a part of the party on the way over and back.

We had a rough, wet, ride across the Chesapeake. The wind, and waves, from the north meant we took waves on our port side. Because of the significant amount of splashing over the sides, everyone tried to cram into the small pilot house area. Throughout the ride, my only thought was, “I wish the wind had been from the north on Friday. It would have been a totally different, more pleasant, journey.”

I took along my handheld GPS so I could track our course for future use. I’m glad I did because it can be quite shallow, even within the channel. Danny would point out an occasional marker saying, “You want to stay away from the marker. Give it a wide berth.” Etc.

Once at Hooper’s Island, I found it interesting how the marina attached temporary poles onto their piling to use for the contest. This helped protect the pilings from being bashed too much. Something new, at least for me, is that the docking contest also had a youth competition. I found that to be the most interesting part of the entire contest.

Although the contest was fun, I admit that it became almost tedious. I had as much fun walking around the boat yard looking at the boats – some in pristine condition or, more often, in disrepair. Danny started to get so bored he pulled out his cornhole boards and set them up in the parking lot. 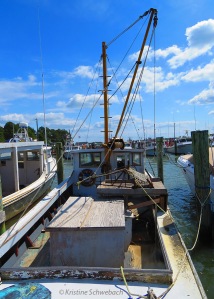 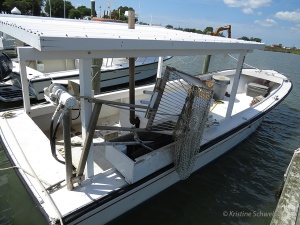 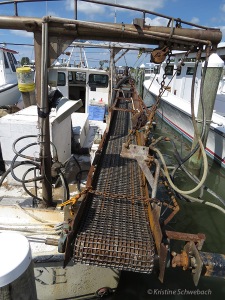 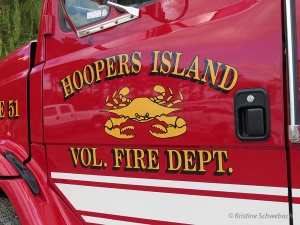 Fortunately, the ride home was much smoother. The winds had died down from 17.7 knots in the morning to 7.7 knots by late afternoon. At one point Danny had to have everyone move up from the back of the boat so he could pass through a particularly shallow area.

The day ended up being very nice. I’m glad Lori and I rode with Double D as it made for a more fun social event.