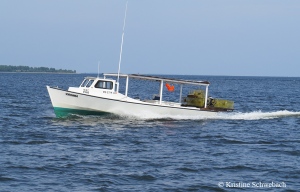 We had plans to meet the Boyz for “brunch” at Striped Rock in Solomons Island. Not knowing whether or not it would storm in the afternoon, we decided to drive to the Boyz’ house and ride with them.

B wanted me to practice captaining a twin screw vessel, in preparation for our new boat, so he had me captain the entire day.

I’ve already captained their 320 Searay Sundancer but I had never docked with twin screws. I encountered no problems docking at Striped Rock as we docked at the end T-section.

September Song met us there. I thought they’d come on Half Note but, surprisingly, they drove. After lunch I asked if they’d want to meet us up at Broomes Island, but they declined.

I again captained up to Broomes. Once there I had to dock in a slip – much more difficult than pulling up to the end of a T. With a single screw you use a lot of turning of the wheel while shifting. With twin screws, however, you don’t touch the wheel and instead shift each screw independently. I docked completely on my own and did a GREAT job! Not to sound arrogant, but, I wasn’t really surprised.

A band played in the tent area – which I

didn’t care about so I sat at the bar. In the middle afternoon someone brought out a couple of cornhole boards. A lot of people went out to watch various people play in the grassy area.

By late afternoon I needed, and wanted, to leave, as I’m sure did Eric and Lori. When I went to B to say it’s time to go he snottily snapped, “NO! No one is leaving!” Eric didn’t want to argue with him so we walked away.

A bit later I mentioned I needed to go. Again, almost like an angry 3-yr old having a tantrum, he replied, “NO!”

At this point I’m getting angry because I no longer have control of my movements. After over an hour I had had it. I told Lori we need to go; she said she tried. I told her if that’s the case we are NEVER NOT having our own boat because I do not want to ever again be held hostage. Obviously Lori could see I had reached the end of my patience. I don’t know what she said to B but we were soon underway with me at the helm.