We launched the stand-up jet-ski today. To our relief, and delight, it ran beautifully. In the afternoon, Lori wanted to take the ski out so I followed along in the boat as the Jet Ski Support Crew. We went up to the Boyz’ house as they were in Hollywood for the weekend.

Tropical Storm Arthur threatens to ruin the weekend, but so far we have had a nice, clear sky. We sat and chatted with the Boyz for a while until I noticed the sky seemed to be getting darker. I finally convinced Lori to leave.

filled the sky up-river. Down-river, however, it still looked like clear blue sky. It seemed as though a distinct line between gray and blue dissected the Boyz’ house.

I didn’t realize how loopy Lori had become until she started to ride the jet ski home. It was almost as bad as the drunk Paul on the stand-up a few 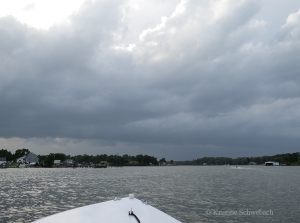 years ago – ride along a short ways, fall down, get up, ride, fall.

It took half an hour to get from the Boyz’ house to our house. Actually, with all the falling I’m surprised it didn’t take longer. I kept offering to ride the stand-up, but she refused.