Time: ~ 1:00 pm – ~ 7:00 pm: it was just too nice to leave earlier in the afternoon, a shame to not stay and enjoy the company of friends and the fabulous view
Vessel: 18’ Simmons Sea Skiff replica
Conditions: FANTASTIC weather day today – best we’ve had in a very long time; temp below 90, low humidity, nice breeze; sunshine

I filled the skiff prior to departure – filled it FULL with just 5 gallons mixed 100:1. That means the journey begins with a full tank of fuel. Tank size? 12? We’ll see how far we go on 12.

We hugged the St. Mary’s coast line on our way to Broomes Island; nice to get an up close and personal look at homes in the neighborhood. After passing Greenwell State Park we cut across towards Broomes. When we arrived, I expected to park on the very inside wall. To my surprise, a fairly large bowrider sat docked on the inside wall, while the deeper water wall area sat completely vessel free. To the inside wall we went.

As we approached, two gentlemen stood at the pilings and caught our lines for us. Lori laughed and said, “Wow, we’re not used to people actually helping us. Thank you.” It took a bit of athletics and gymnastics to actually climb from the skiff up to the pier. Once up, I certainly didn’t want have to go back down. Eric, seeing our arrival, delivered two drinks as we scrambled about. I put our bottles aside to quickly tie up and then put our bottle cozies on. I picked up my bottle and heard a whoop whoop from the boat bar. I look for someone I know and instead see a man at a table pointing to his hat – an ISU Cyclones hat. He had seen my Iowa State coozie. When I finished I went looking for him to say hello. I met him, his son, and his wife who is from Ames. They now live in Lexington Park. SMALL WORLD!

Lester and Mar already sat at the upper bar when we arrived. Once I finished meeting the Iowa State people, and saying “Hi” to Eric, we headed up to the upper bar to sit with them and, of course, see Jeannie. We enjoyed the company, ordered lunch, drank some drinks. (Hydration is very important on a hot summer day.) After chatting we all meandered to the lower boat bar, which included also Ted, to socialize with Eric and Vince. We had a lovely time.

Kari and Jeff arrived with a cute little girl. Ted asked me, “So, are they trafficking in children now?” Too too funny. “Yes,” I answer, “that’s exactly it.” In fact, they are babysitting a friend’s daughter for a WEEK! A WEEK! That’s going to be interesting to hear about. I asked them if they were practicing for one of their own. Jeff immediately said, “No way, I’ve already had mine.”

We watched a variety of boats pass by which only adds to the atmosphere of enjoyment. As the tug we had admired earlier began to depart, the ISU family told me that the tug came from Iowa. “What?! Really!?” “Yes,” they say, “Okoboji. Check out the transom.” I did, and it was! Unbelievable. If had known that, I would have looked for them as they disembarked.

We had a great afternoon talking with friends. Mike noticed that I ordered a unique beer. I told him I drank Doggie Style. “What? They serve that here?” I gave him a sipsies from mine and he ended up ordering one for himself. I LOVED his coozie – Wasted Seaman Fishing Company. Fantastic to be drinking Doggie Style from Wasted Seaman.

When Kari and Jeff first arrived, Kari pointed out that in her younger years she thought it “so tacky to bring a child to a bar. Now look at me.” After a while, Kari and Jeff’s kid started acting tired and wanted to go home for a nap. Instead, Kari put her in the rubber duckie and told her she could lie down. She put out a beach towel for a blanket, the captain’s bench for a bed, and I suggested her life vest as a pillow. The rubber duckie, like our low rider skiff, sat below the wall level so we stood overlooking the impromptu bed. Kari said, “How sad is this, I’m making her sleep in the boat because I want to get my party on.” Yep, sounds about right. Even Henry was wore out. He slept in the middle of the hubbub. He didn’t bother waking up as people stepped over him.

Lori and I sat near the rubber duckie to allow Kari an opportunity to rest from the “parenting” responsibilities. We sat and watched the parade of people stepping on and off Double D, as they imbibed in what I heard could be moonshine. As I sat there I couldn’t believe how many antennas towered above Double D, not to mention radars and other technologies.

We noticed a lovely Chris Craft coming towards the outer wall to tie up. Lori and I jumped up to assist. As Lori said, “This boat is too nice to have it damaged so let’s help make sure it doesn’t hit the wall.” Once they had tied up we asked about various aspects of the boat. People asked about the motor size, I wanted to know the year and found out it was a 1964 Chris Craft. Hummm, older than I. 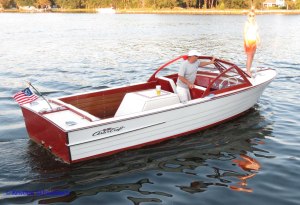 Lori sat enjoying the day and the view. We kept staying because it was just too nice to go home. At one point I went up to refill my coozie and a couple at the bar introduced themselves saying he was from Cedar Rapids. ANOTHER person from Iowa. Seems as though it was an Iowa reunion. I’m so glad I use that coozie.

I had gone up to use the facilities and I saw Harold and Betty sitting there having lunch. I stopped and say, “I’m so glad to see you here, we came in the little wood boat we had told you about.” Harold started laughing and said he had seen it. When they first arrived Betty saw our boat and said, “I wonder whose boat that is.” Right away Harold said he was sure it must be our boat since we had just told him about it last week when we saw him.

Finally we had to think about getting home since, after all, I did have to work in the morning. While paying I saw Casper also at the bar. I said hello to him and asked if he came in his Chaparral. He said, no, he came in his small fishing boat tied to the inside wall. I pointed out our small boat. They prepared to leave at the same time as we cast off. Lori noticed that Casper may have bottomed out with the low tide and offered to pull them to deeper water. He got to deeper water but then had difficulty with starting his engine and keeping it running. Lori then offered we could tow them, but we would tow them to our house not his since he lives north of Benedict. I couldn’t help but wonder how our little boat would do towing another boat. Fortunately Casper got it running and away we both went in opposite directions. 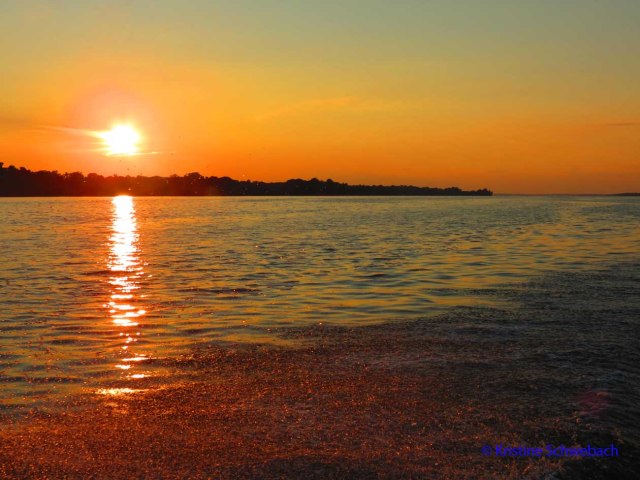