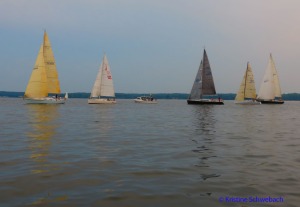 I went out to see the regatta. A lovely evening, except a bit overcast which made for less than stellar photographic opportunity.

I arrived shortly after the first class of sailboats had passed the starting line. I hung out nearby in order to see the second race begin. I noticed my neighbor our in his boat, Paw Prints. He not only had his two dogs for company, but also a lady I have never seen before. Not surprising since we don’t socialize with him.

Once the entire race had started, I decided to cruise over to the RC boat to ask some questions and give them a copy of my web site card. Since I have photos from previous regattas I thought they might like to share the information with sailing association members. As I approached, the young ladies on the boat kept saying, “Your boat is soooo cute. I want one.” The gentleman on board asked what it was and I told him.

I then explained that I have photos on my blog of past regattas. He asked how quickly I could turn the photos into viewing. I looked at him funny. He then asked if I shot digital so that I could easily and quickly show the photos. He then explained he could hook me up to show photos on their tv and invited me to the club house after the regatta. I declined as I had not prepared to stay late and have drinks, although I would like to accept the offer in the future. The gentleman then introduced himself as Eliot from the sailboat Stingray.

He continued to say that he’d like to set me up with the sailing association since, “obviously you want to make money from this.” I answered, “No, I don’t have it set up to make money. This is simply my own obsession.”

I then asked if they monitored a VHF channel. Yes, channel 72 during the regatta. Good to know. I’ve wanted to know that for years. I then took off down river to watch the boats as they rounded the race marker and unfurled their spinnakers.

When I returned to the finish line I noticed Paw Prints bobbing in the water. I slowly cruised over and said, “You are my neighbor.” Although we’ve met a few times before, in the past nine years, I again explained to him whose house I had bought. I then told him who built my boat, since I figured he probably knew Joe. He did. 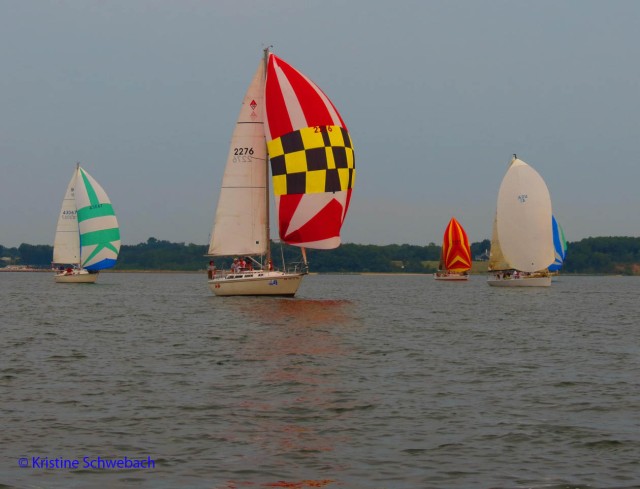 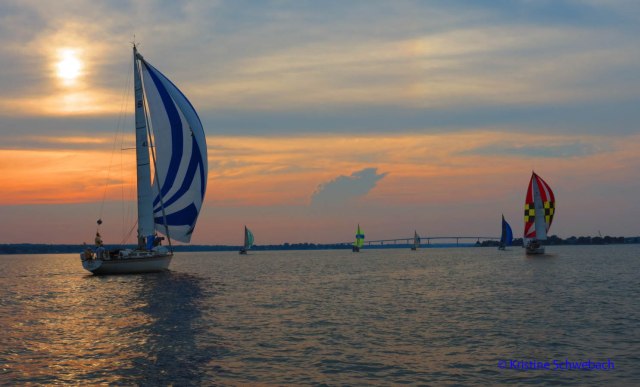 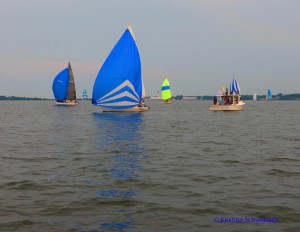 I then headed towards home. As I came near to our house I noticed Paw Prints following. As I put the skiff on the lift Dave came up and asked if I liked to sail. I said, “I have sailed. I once owned a sailboat and I have friends that have sailboats.” He then said he had a sailboat and if I were ever interested in going sailing to give him a call. He’s always looking for people to go out sailing with him. According to him, “People my age don’t tend to go sailing.” I told him sailing seemed like a fine idea, until the wind stopped, then sailing SUCKS! He agreed and explained, “That’s why you have a motor for when that happens.” I invited him, and his friend, for a drink, but they declined and departed.

I realized that when I’m in the little skiff I’m far more likely to approach boats and be more social. I rather like that. I think it’s because (a) I can get so much closer, and (2) the uniqueness of the boat interests people and I feel more welcome.