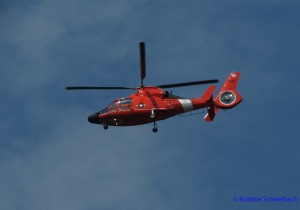 Lori and I were invited by Barry and Eric to join them in a 40th birthday celebration cruise, departing Ft. Washington on Wednesday morning, going to the Tides for a few nights, then returning to the Patuxent River. Lori and I gladly accepted this generous invitation, and unique opportunity. While waiting for the final preparations to be completed before launching I was THRILLED to see all the various planes and helicopters pass overhead.

We departed the boys’ house, in Ft. Washington around noon o’clock – right on time for the planned 10 o’clock departure. I was delighted to have an opportunity to cruise the entire Potomac River from, essentially, Washington DC all the way to the Bay. I have, in the past, done various sections but not the entire distance.

I learned that Ft. Washington actually has a fort on the river. I saw Mt. Vernon which I don’t remember ever seeing before. We passed Fairview Beach and Colonial Beach. We even passed the Possom Point Power Station. I remember years ago, when Lori and I first met, going sailing with Mark. When we passed the power station he commented that it would have been so much better if they had named it Possom Point Power Plant. I agree.

We were delighted to have such a gorgeous day for a cruise. Bright sunshine, not oppressively hot, and FLAT water, almost like glass. I enjoyed seeing the various vessels on the water including the two story wood boat with a lot of well maintained wood accents and the large yacht, Footloose, cruising up river.

After we passed under the bridge, and neared Cobb Island, we entered waters that Lori and I were familiar with. At one point, south of Cobb Island, I happen to look at my GPS and noticed that without trying we were on an exact track that Lori and I had been on before. Extremely useful since we intended to stop at Port Kinsale for fuel. By this time, Barry had given me instruction on how to captain their boat and I was at the helm of Looking IV. 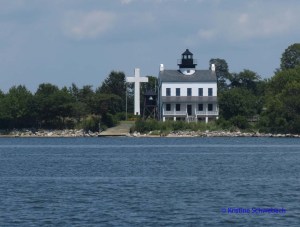 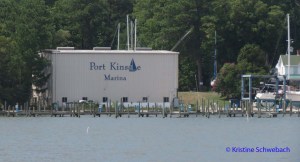 We cruised into Port Kinsale and fueled. Barry was a bit disappointed that the restaurant, the Moorings, wasn’t open for lunch on a Wednesday. It took about half an hour to fuel and we returned to the Potomac. We decided to drift for a bit and have lunch. Fortunately we had packed some chicken salad, sandwich rolls, cheese and crackers, and some fruit. I brought pre-sliced cheese which amazed Eric. He didn’t know you could buy cheese already sliced. He said, “I’m never going to have to cut cheese again.” He’s so funny.

We ate a lovely lunch before again proceeding down river. It’s always exciting to see the Bay stretched out in front of you. According to Eric, if you can’t see the other side then you must be in the ocean. 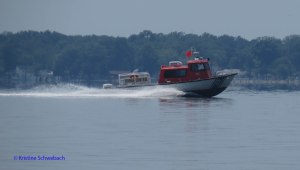 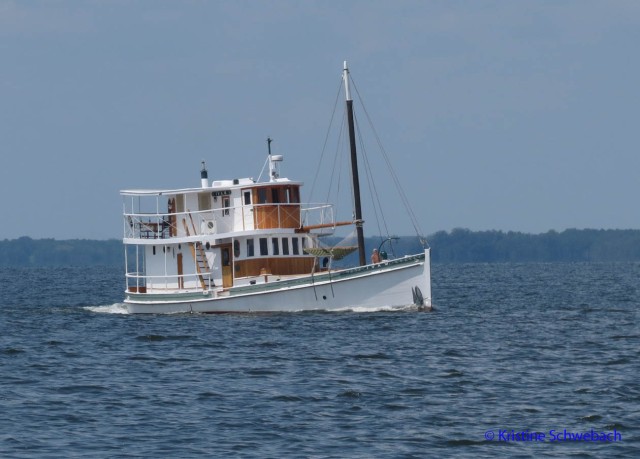 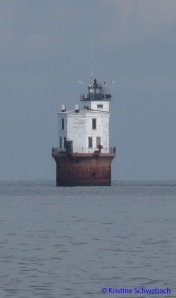 We rounded Smith Point and saw the lighthouse in the distance. I hadn’t realized Smith Point had a lighthouse. A very nice surprise. From Smith Point onward south we entered what we considered uncharted waters. Ok, so technically, it is charted, however NONE of us had ever been south of the Potomac River. A new adventure for us all.

Barry and I shared the captaining responsibilities while Lori and Eric did their part…. drinking beer.

As we approached the Rappahannock, Barry stood at the helm. He pointed out what he thought was the entrance to the Rappahannock River; Lori and I were not convinced. I couldn’t believe we had reached it so quickly. Although we weren’t convinced I finally said, “It’s his birthday and he can go where ever he wants.” Surprisingly enough, it was the Rappahannock River. I expected the marker at Windmill Point, which is on the north side of the mouth of the Rappahannock, to be more prominent, and a bit closer to shore. That’s what threw me off, plus, I had gone below decks and hadn’t paid close attention. 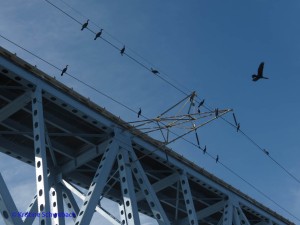 We had brought our marine chart for the Chesapeake Bay area. At first I hadn’t planned on doing that, I mean, after all, who doesn’t have a chart on their boat? I found out the answer – the boys. Although we had reliable GPS systems, it was nice to look over the chart to assess what lay beyond the GPS screen shot. As we entered the Rappahannock Lori mentioned that we needed to look for a bridge. “Are you sure?” Barry asked. “Yes, we’ll go under route 3.” Barry looked at the paper chart then his GPS and made adjustments accordingly. As we passed under the bridge I noticed power lines attached alongside the bridge. I had never seen that before. 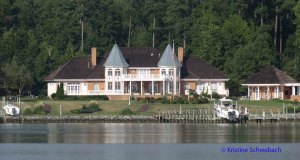 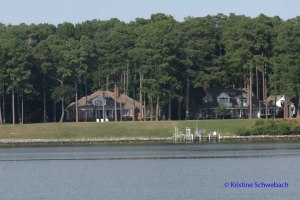 After seeing houses with sprawling lawns, I wondered if the houses in the trees felt as though they looked through prison bars as they gazed towards the water.

We easily found the channel entrance into Carter Creek and saw the Tides sprawled out ahead. So very interesting seeing the various houses and buildings along the water’s edge, and passing the vessels that ply these waters. 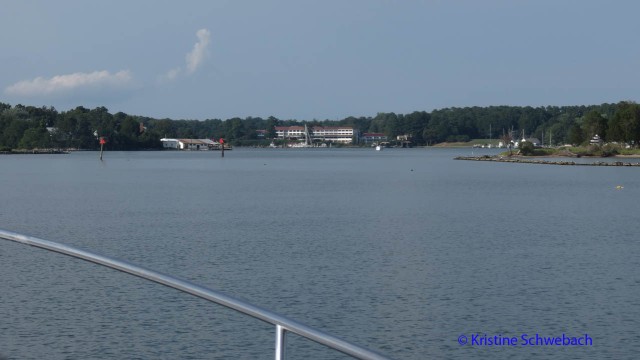 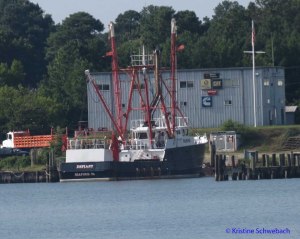 As we passed by this trimaran, Lori noted that it looked like a regular sailboat with training wheels. I noticed this lovely wood boat on a tour and thought “Faded Glory” is a terrible name for a boat. I would want something grand like “Blazing Glory” or “Pride and Glory” not something that hinted towards dwindling towards dereliction.

To my surprise, we arrived at the Tides around 5:00. I thought for sure we would arrive much later. A dockhand greeted us at our slip and assisted in our tie up. I thought, at first, this is nice, until I realized a primary concern was not getting us tied up so much as making sure to get our credit card for the front desk. Hum, interesting way to feel welcome.

After checking in we actually returned to the boat for some congratulatory drinks. In the evening we cleaned up, a bit, and walked into town to eat dinner at Nate’s Trick Dog. People at the Tides claimed Trick Dog was a 5 minute walk since it was” just outside the gate.” They also said it was between two churches. First of all, it took five minutes simply to walk to the gate entrance. At that point we saw nothing but houses in one direction and emptiness in the other direction. We headed up the street – and had the great fortune to see a gorgeous full moon.

As we walked back towards the Tides Eric said, “Oh look at how beautiful the moon is! Oh, wait, that’s a streetlight.” We tried to have drinks at the Tides bar but it had just closed. This ticked Barry off, a bit, since he specifically asked if there would be a bar open during the week, such as Wednesday. The Tides said, “Yes, the bar is open until midnight.” Hum, again, reality didn’t match the story we had been told. We walked to the boat for a final evening cocktail before retiring to our respective rooms.