Mid-morning Joe, the boat mechanic, arrived to have a look at the boat to address the squealing sound we’ve been hearing. He brought along his two kids, and one fishing pole. The younger of the two caught a perch straight away. I set him up with a 5-gallon bucket for his catch and told him we’d keep any of the fish he caught that he didn’t want. The kids quickly surmised we’d use the fish in the crab traps and got on board with catchin’ for crabbin’.

Joe did a few things, looked the engine over, changed the spark plugs, and listed items that need to be addressed.* We then lowered the boat into the water for a sea trial. I learned an interesting item: 600 hours on a boat is about equivalent to 12,000 miles in a car. I tried to make sure to get the squealing noise to happen, which it usually did loudly at 3200-3600 RPM and when down throttling. During the sea trial, however, the squealing could hardly be noticed. As Lori pointed out, it’s not making the noise because now we have the mechanic on board.

Later in the afternoon, since the boat was already uncovered, I wanted to go out for a few drinks. Lori agreed to go to Kingfishers with me. On the way to Kingfishers I mentioned that I hadn’t seen the barge for the fireworks. “Oh yeah, me neither.”

As we passed Molly’s Leg we saw a beautiful sailboat with a gorgeous teak top deck. We then noticed a second sailboat anchored in that cove area. This boat – old, a great deal of the painted side worn down to the bare wood – mirrored the opposite of the nice teak. Along the old boat’s starboard deck we saw two weathered propane tanks and a gas tank.

As we docked, Eric brought out two beers – a Lite for Lori and a Sam Adams Whitewater IPA since, as he explained, they had no Doggy Style. It tasted fine. Unfortunately, they ran out of that one, too. I then ordered a draft. I later noticed a draft being poured 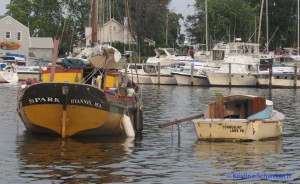 in a nice Kona micro-brewery glass. When I ordered a small beer, they asked, “Same glass or new glass?” “New glass,” I say, “in a Kona glass so I can steal it when I leave.” (I can honestly report that I did come home with a Kona glass.)

Departing Solomons, we again passed the two wood boats anchored near Molly’s Leg. Now, however, a CUTE, little dingy matching the teak boat had rafted to its parent ship. The more worn, salty dog boat also now had a smaller boat rafted alongside.